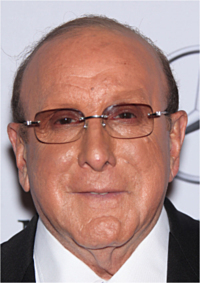 
CLIVE DAVIS’ traditional PRE-GRAMMY GALA NIGHT 1: A BENEFIT FOR MUSICARES got underway tonight and even though virtual, it was still the hottest ticket in town, with invites and links going out earlier this week. This year would have been, as always, the night before the GRAMMYS, at the BEVERLY HILTON, but due to COVID, this year’s 63rd annual GRAMMY AWARDS was moved from JANUARY 31st to MARCH 14th.  Tonight’s edition will raise money for MUSICARES, while the next iteration, Part 2, will be held MARCH `13th, the night before the GRAMMY AWARDS, where guests will include PAUL SIMON, CARLOS SANTANA and JONI MITCHELL and will benefit the GRAMMY MUSEUM.. A donate button was included on the screen to help raise money.

CLIVE appeared live from MIAMI BEACH “where it’s 72 degrees” to introduce the proceedings, welcoming everyone to the virtual gathering. “It might be a long time, but that’s a tradition,” he said. “Everybody celebrates the power and uniqueness of music with their attention.: Tonight is about the best of the best, some of the greatest performances of all time.”

Tonight’s invite list will be closer to 2,000 virtual attendees than the usual exclusive 1,000. The gala is being streamed exclusively on MOMENT HOUSE, and will feature anywhere from “three to 10 live performances.”

The show featured the legendary music mogul  — on video — talking about 20 of the most memorable live performances of all-time amid interviews with BRUCE SPRINGSTEEN, ROD STEWART, CHANCE THE RAPPER, DAVID FOSTER, JOHN LEGEND, CAROLE KING, JAMIE FOXX, BARRY GIBB, DIDDY and GLADYS KNIGHT, among others.

CLIVE then presented a clip of FRANK SINATRA singing “NEW YORK, NEW YORK” to open the memorable live performances portion of the show, followed by MICHAEL JACKSON’s historic Moonwalking “Billie Jean” at MOTOWN 25 and his first live interview with CHANCE THE RAPPER, whom he quizzed on his love of all things JACKSONS.  “It shaped my childhood, it was probably my first exposure to music,’ CHANCE said of MICHAEL’s legacy.

Other noted “greatest” performances included BOB DYLAN singing “Blowin’ in the Wind” in the ’60s and a rare clip of THE BEATLES singing “Hey Jude” on “The DAVID FROST Show”;

DAVIS then chatted about the FAB FOUR’s influence with 16-time GRAMMY-winning producer DAVID FOSTER. “I was a classical nerd, a pianist. At 13, I heard ‘She Loves You’ on the radio and wondered, ‘What is this?’ I’d never heard anything like it. I turned to my father and told him that’s what I want to do for a living.”

MARVIN GAYE’s performance of “What’s Going On” at MOTOWN 25 not long before his death was next, with CLIVE calling it “one of the greatest albums of all time,” then talking with JOHN LEGEND about the singer’s influence on his own music. “It’s sensual, haunting, it’s got both pain and beauty,” said LEGEND about GAYE’s voice. The two then discussed the artist’s responsibility to express a political viewpoint in their work. The ubiquitous musician then gave the evening’s first live performance with an appropriately poignant cover of GAYE’s environmental classic, “Mercy Mercy Me.”

DAVIS then paid tribute to seeing JANIS JOPLIN for the first time at MONTEREY POP, a life-changing event for him as she bares all on “Ball And Chain,” followed by another CLIVE label artist as BRUCE SPRINSTEEN exhorts “Born In The U.S.A.” in front of a stadium-sized crowd in the mid-’80s at his commercial peak.

BRUCE himself was the next interview subject, as CLIVE asked when he knew music would be his career. “I’ve had a band since I was 14 1/2 and it’s the only thing I was ever deeply interested in,” he recalled, dropping out of college after a year. DAVIS mused about his desire that SPRINGSTEEN wouldn’t be considered “the next BOB DYLAN,” an analogy which proved disastrous to other promising singer-songwriters, then asked him about his hope for the future of the AMERICAN dream, as BRUCE touts “the glimmer of possibility.”

DAVIS then paid tribute to THE ROLLING STONES with a clip of “(I Can’t Get No) Satisfaction” from their 1989 STEEL WHEELS tour and ARETHA FRANKLIN, with a clip of her famed DECEMBER,, 2015, KENNEDY CENTER HONORS performance of “”(You Make Me Feel) Like) A Natural Woman” as honoree CAROLE KING freaked out in the audience. CLIVE then brought out CAROLE KING to discuss her feelings about the event.

DAVIS then brought on JENNIFER HUDSON from her CHICAGO home to pay homage to ARETHA FRANKLIN, whom she’ll be playing in the upcoming biopic, with a soaring gospel medley of “Amazing Grace.” and “Bridge Over Troubled Waters,”

CLIVE introduced a clip featuring a duet between RAY CHARLES and WILLIE NELSON on their 1982 collaboration, “Seven SPANISH Angels.”

JAMIE FOXX was next, as CLIVE reminisced about the singer asking him to play his PRE-GRAMMY party. “You take us back to school days, when we had talent shows, except with superstars,” said JAMIE, who went into spot-on impressions of CLIVE and RAY CHARLES as he plunked the keys on the piano.

DAVIS proceeded to introduce a clip of the BEE GEES performing “Stayin’ Alive” from 1989 while on tour in AUSTRALIA before bringing on BARRY GIBB over Zoom for a chat about him giving DIONNE WARWICK the song “Heartbreaker” to record..

CLIVE then sang the praises of WHITNEY HOUSTON, calling her medley on the 1994 AMERICAN MUSIC AWARDS of “I Love You Porgy,” “And I Tell You I’m Not Going” into her chart-topping “I Have Nothing,” the “greatest television performance of any artist ever,”

Longtime PRE-GRAMMY PARTY musical director RICKEY MINOR zoomed in to chat with CLIVE about WHITNEY’s legacy, and his suggestion she perform the medley on the AMAs.

ROD STEWART singing a classic version of “Maggie May” with RONNIE WOOD at LONDON’s ROYAL ALBERT HALL in 2004 was next on CLIVE’s memorable performance list, followed by a chat with the man himself. STEWART revealed he wanted to be a professional soccer player before he ever started doing his impression of BOB DYLAN while busking under the BRIGHTON piers, then told the true story behind “Maggie May.”

ALICIA KEYS was up next on CLIVE’s hosanna list, as he introduced a clip of her and JAY Z’ performing “Empire State Of Mind” on TIMES SQUARE, then talked about it with her. “I remember getting the phone call from JAY Z.  He thought it was special and powerful and that I had to do it because it was about NEW YORK,” said the city native.. She also revealed to CLIVE how she got out of her deal with COLUMBIA RECORDS to sign with DAVIS.

A clip of MADONNA performing “Like a Prayer” in PARIS in 1990 followed, then brought on SEAN “PUFFY” COMBS to discuss ARISTA’s financing of BAD BOY RECORDS and its breakout star NOTORIOUS B.I.G., showing a clip of him performing “Big Poppa” on an episode of MTV’s “The Grind.”

“It was the vibe,” said PUFFY about his first meeting with CLIVE when he was just 23 years old. “The only thing you talked to me was about the kind of music I wanted to make. You actually talked to me about music first, rather than money.  And I was blown away by your understanding of hip-hop culture.” Talking about CLIVE letting him hang out during other artists’ meetings in his office: “I just wanted to get in that room and learn.”

Next up was the only clip from a previous PRE-GRAMMY GALA, this one in 2018, when CLIVE fave GLADYS KNIGHT brought down the house with a scintillating “Midnight Train To GEORGIA,” revealing in the chat afterwards the original title for the song was “Midnight Train From HOUSTON.”

CLIVE closed the night by paying homage to QUEEN BEY with a vintage clip of “Single Ladies (Put A Ring On It);”