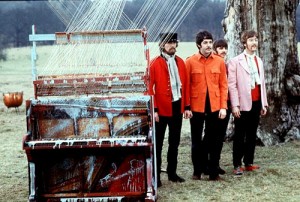 1964, The Searchers were at number one on the UK singles chart with the Sonny Bono song “Needles And Pins.” The group’s second UK chart topper had originally been recorded by Jackie DeShannon

1967, The Beatles shoot a promotional clip for “Strawberry Fields Forever” in Kent, England.

1967, The Jimi Hendrix Experience are filmed at London’s Saville Theatre to promote their next single.

1969, The Beatles, with Billy Preston, played their lunchtime rooftop gig on top of the Apple building on Savile Row in London. It was the final time The Beatles would perform live. The played Get Back / Don’t Let Me Down / I’ve Got A Feeling / The One After 909 / Dig A Pony. Traffic was brought to a standstill as crowds of people gathered below and watched from windows in nearby buildings. The performance itself began at around 12 pm on a bitterly cold Thursday lunchtime and lasted for 42 minutes. John Lennon ended the performance by saying “I’d like to say thank you on behalf of the group and ourselves, and I hope we passed the audition.”

1970, The Flock, Fleetwood Mac, and The Grateful Dead appeared at the opening of The Warehouse in New Orleans.

1970, Edison Lighthouse were at number one on the UK singles chart with “Love Grows (Where My Rosemary Goes.”) The group’s only Top 40 hit spent five weeks at the top of the charts. In February 1970, Tony Burrows became the first, and still the only person to appear on BBC Television’s Top Of The Pops fronting three different acts in one show: Edison Lighthouse (who were number one that week), White Plains, and Brotherhood of Man.

1970, The Who performed at the Concertgebouw, Amsterdam. 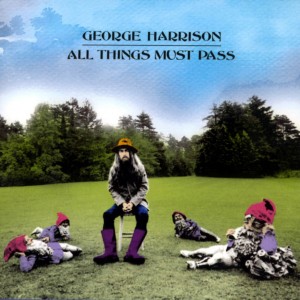 1971, George Harrison became the first solo Beatle to have a number one when”‘My Sweet Lord” went to the top of the singles charts. The song from his All Things Must Pass album stayed at number one for five weeks. The track returned to the top of the UK charts in 2002, following his death.

1972, Paul McCartney wrote and recorded his protest song “Give Ireland Back To The Irish” within 24 hours of Bloody Sunday, when 13 Catholics were killed by British paratroopers.

1973, After recently changing their name from Wicked Lester, Gene Simmons, Paul Stanley, Ace Frehley and Peter Criss made their first appearance as KISS at the Popcorn Club in Queens, New York. They wore little or none of the makeup that became the band’s trademark and performed to an audience of three people.

1975, The Bee Gees begin recording “Jive Talkin,” which became their second chart topper.  Gibb’s inspiration for the song came when his wife commented on the sound their car made while crossing a bridge over Biscayne Bay into Miami. She noted, “It’s our drive talkin’.”

1982, Hall and Oates went to number one on the US singles chart with “I Can Go For That, (No Can Do,)” the duo’s fourth US chart topper. It was a number eight hit in the UK.

1988, INXS had their first US number one hit single with “Need You Tonight.”

1990, Unhappy with the re-issue of the bands early single “Sally Cinnaman,” The Stone Roses trashed their former record company Revolver FM’s offices and threw paint over cars. The band were arrested and charged with criminal damage.

2005, The Chemical Brothers went to number one on the UK album chart with Push The Button, the duo’s fourth UK chart topping album. The Game had the US number one album with The Documentary.

Today in Rock History – May 23

Today in Rock History – May 22

Today in Rock History – May 21