When Deap Vally and The Flaming Lips announced that they were recording a collaborative album under the portmanteau Deap Lips (ugh… we hate that name so much), we were a little surprised. But both these acts are nothing if not experimental so we were hugely curious about the sort of thing they would throw together. 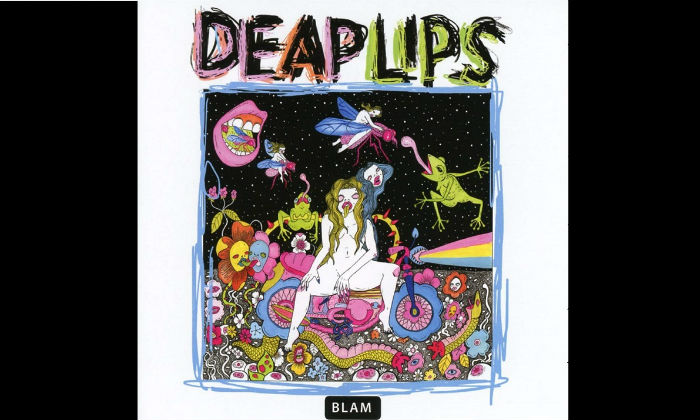 Indeed, we weren’t expecting anything so ambient from the alt-rock Californian ladies of Deap Vally, and the self-titled album Deap Lips certainly leans more into Flaming Lips territory aside from the vocals. But did it leave much of an impression?

Home Thru Hell is a great opener. The scuzzy bass, weird synths, distorted vocals and suggestion of a bluesy flavour in there feels like it’s setting you up for the right kind of experience. That garage rock sound of Deap Vally is mellowed out by the psychedelic Flaming Lips, and its got those unexpected effects as well so you know there’s going to be an experimental edge throughout.

One Thousand Sisters with Aluminum Foil Calculators feels like random filler, however. There’s nothing wrong with it per se; it’s a pleasant enough trip hop instrumental, but inexpertly used given that there are no other instrumental tracks on the album. It sort of feels like it shouldn’t be there and that it was just thrown in because all the layers of production weren’t adding enough depth.

The album continues well enough though with the short but uplifting dream-pop number S**t Talkin and its melodic, breathy vocal; followed by the acoustic, country-pop vibes of Hope Hell High; and – rather bizarrely, it has to be said – the punky, riot grrrl-ish track Motherf***ers Got to Go. Wandering Witches is another highlight. Those soaring synths next to a jazzy rhythm with darker, shoegaze vocals is definitely going to make it to our Halloween playlist this year.

Meanwhile Love is a Mind Control is far too long at seven minutes; the first half has a monotonous post-punk edge and the latter half falls back into shoegaze territory. It’s inoffensive, but it’s a little disjointed and utterly forgettable. Plus, the nu disco flavour of Not a Natural Man felt out of place, apart from the deliberate monotonous vocals again which, at this point, are becoming boring AF.

One thing that I did enjoy about the album was the uninterrupted, fluid transition between tracks; it gave the album a cohesiveness that may otherwise not have been there and almost felt like a protest against the “shuffle” button. To elaborate: There’s an idea in the music world that the concept album is dead because the playlist killed it. Certainly, Deap Lips feels like the kind of album you need to play from start to finish and we like that approach to music.

But then you have their Steppenwolf cover, The Pusher. This doesn’t flow from previous track Wandering Witches like it should, and to make matters worse, it’s mediocre at best. It’s another five minutes of dreamy monotony, like a stripped down version of the original on an album that is anything but stripped down.

Thankfully, Deap Lips ends on a positive note. There is Know Right There is Know Wrong brings back to those scuzzy guitars and lazy, breathy vocals. We wish there was more of this on the record. Deap Lips tries to be too many things at once; you can be experimental without being too much. The Deap Vally girls are so talented and versatile in that they can do dreamy, ambient pop, as well as neo-soul and powerhouse rock vocals, but they can’t make the most of their flexible style on an album like this.

The biggest issue, though, is that they’ve really overdone it on production. Even on the album highlights, it’s almost like there’s a dirty smudge across each track; something to ruin it when you think you’re enjoying a song. There are moments when you feel like you’re listening to a bad remix, particularly on S**t Talkin and Not a Natural Man.

There’s enough on Deap Lips to make it an enjoyable album but I can’t help but feel it will be pulled apart by listeners, with only a select few tracks transferred to our playlists. As much as that feels like it would be overlooking the point of the record, there are simply one too many tracks that we don’t want to listen to again.