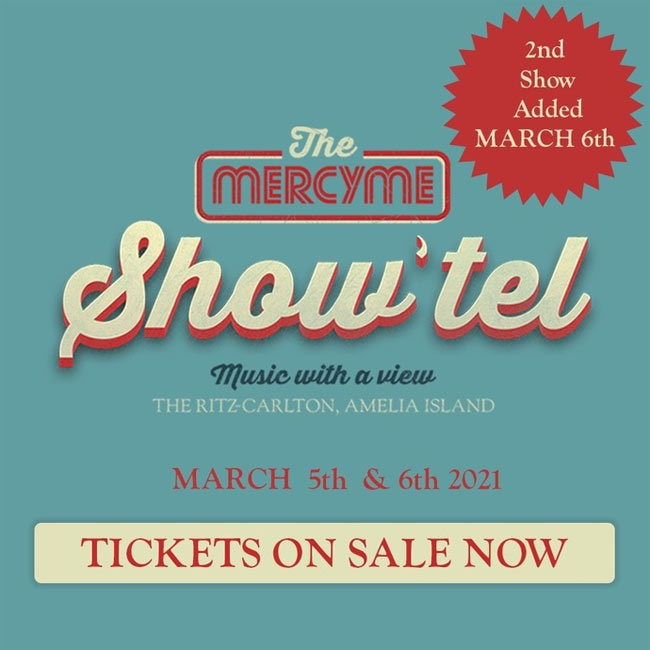 
Nashville, TN…. (January 26, 2020) – GRAMMY® nominated, multiple American Music Award and Dove Award-winning band MercyMe has added a second show to what will be their first live performances in a year. The Show’tel Amelia Island with MercyMe event has added a second show for March 6 after the concert view hotel rooms sold out for the original date, March 5th, in 48 hours. Limited tables are still available for the March 5th show, and all tickets for March 6th go on sale today at 10am ET. For tickets, please click HERE.
Show’tel Amelia Island with MercyMe will allow fans to escape to the beachfront luxury of The Ritz-Carlton, Amelia Island to enjoy an unforgettable live performance with the band from the comfort of their own private balcony with an ocean view looking out at the stage, or from a table on the lawn with an ocean view in front of the stage. The following video provides a visual rendering of what the experience will be like.

An extremely intimate VIP experience, the event is designed to exceed the expectations of the local health department with the goal to give everyone the experience of a lifetime without sacrificing anyone’s safety.

About MercyMe:
It continues to be a landmark time for the multi-platinum selling MercyMe. A major motion picture based on the life of frontman Bart Millard who wrote the mega-hit song “I Can Only Imagine” after the loss of his father opened at a remarkable No. 3 at the box office on Mar. 16, 2018 (Lionsgate, Roadside Attractions). Carrying the same name, Millard’s first memoir also released this year followed by the unveiling of I Can Only Imagine – The Very Best Of MercyMe. MercyMe was named Top Christian Artist at the 2018 Billboard Music Awards, was the top winner at the fan-fueled K-LOVE Fan Awards including a win for Artist of the Year and in 2020 received their eighth American Music Award nod. The group is the 2018 GMA Dove Award Winner for Artist Of The Year, and since their debut in 2001, GRAMMY® nominated, multiple American Music Award and Dove Award winners MercyMe have sold more than 9 million units in CD, single and DVD sales, garnered more than 48 No. 1 multi-format radio singles and four consecutive mainstream radio hits with “I Can Only Imagine,” (No. 4 AC/Top 25 on Top 40/Hot AC). MercyMe made history in 2014 as “I Can Only Imagine” surpassed 2 million digital downloads, making it the first song in Christian music to go platinum and double-platinum in the digital domain. The album containing the hit, Almost There, recently received 4x platinum certification from the RIAA. In 2009, Billboard named MercyMe’s “Word Of God Speak” the No. 1 Song of The Decade and the group the No. 1 Artist of the Decade in both the Christian Songs and Christian AC Songs categories, recognizing them as one of the industry’s most notable talents. They have sold out venues throughout the US and Canada, including Radio City Music Hall, and have appeared on the Macy’s Thanksgiving Day Parade, The Today Show, CBS This Morning, FOX New Channel’s FOX & Friends, CNN, ABC News and in the pages of Entertainment Weekly, The New York Times, USA Today and more. MercyMe’s eighth studio album, the RIAA Certified Gold Welcome To The New, garnered two GRAMMY® nods and four radio hits. LIFER, their latest chart-topping, GMA Dove Award winning and GRAMMY® nominated album, includes the RIAA certified platinum, GRAMMY® nominated smash hit “Even If” which dominated the Billboard and Mediabase radio charts with a 19-week streak at No. 1.

Last summer MercyMe released “Hurry Up And Wait,” the follow-up to their 48th #1 song “Almost Home,” which held the top spot on Billboard‘s AC Indicator, Monitored, National Christian Audience, Mediabase Christian Audience and Christian AC charts, for a combined total of 17 weeks. Hailing from MercyMe’s next album coming spring 2021, the band released their most recent single, “Say I Won’t” in December 2020. Inspired by the story of Gary Miracle, who worked with the band for many years on the road and lost both arms and legs in January of 2020 after falling into septic shock, his story is one of strength and profound faith.

ABOUT THE RITZ-CARLTON, AMELIA ISLAND:
Poised on a bluff of dunes overlooking the Atlantic Ocean, The Ritz-Carlton, Amelia Island finds its home in a destination of unspoiled coastal beauty and Southern Charm. Every room has an ocean or coastal view which can be enjoyed from a spacious private balcony. Guest rooms include King, Double Queens, Suites and Specialty Suites. Each room is appointed with luxury amenities, large screen TVs and world famous luxurious bedding.

The luxury resort features five restaurants, including AAA Five-Diamond Salt, an award-winning spa, named one of the top spas in the world by the readers of Conde’ Naste Travelers, on-site golf and tennis and 13 miles of dune-lined beach to explore.


For more info on MercyMe, visit the JFH Artists Database.