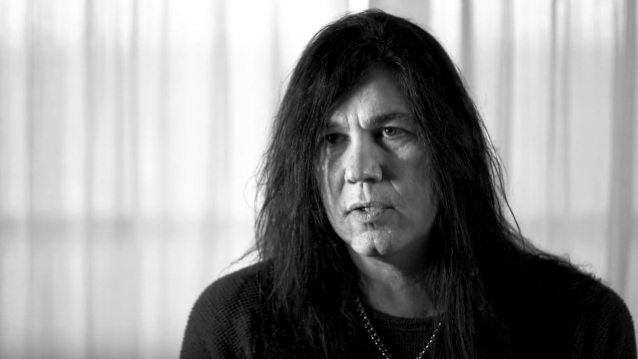 SLAUGHTER frontman Mark Slaughter recently spoke to 80’s Metal Recycle Bin about how the rise of grunge in the early 1990s forced most hard rock bands off the radio and MTV, with album and tour sales plummeting.

“The grunge thing, I think, was a natural course of many events,” he explained (see video below). “A lot of people are, like, ‘Grunge killed this.’ It wasn’t that. I think there was a lot of bands that became a lot of industry that was creating these bands that was not what the bands were. I mean, it was, like, they’d sign the band, then they’d get get a writer, a producer, and these people, and those songwriters and those people, and those hair stylists and those people, and by the time they were done, the band they signed was not even the band that they really signed. They had created a whole different monster, which is the monster of music business. And I think that a lot of bands lost their way and really were not able to do that.

“In the grunge scene, they say that grunge killed our style of music. No — it was people in the business that killed this music,” Mark insisted. “What happened is the largest radio station in the world, MTV, had a new president, who was a programmer of KROQ in California, and he said to Billboard magazine, ‘I will never play MÖTLEY CRÜE, SLAUGHTER, POISON…’ — he named all the bands that were right on top at the time. And the next week, we were off all the playlists. It’s, like, the tide just completely turned. And everybody was, like, ‘What happened?’ Well, the industry made a change.

“In mid-’90s, we were running around on a tour bus barely keeping the gas going. It was a very rough time. But the thing is for us, music is art, music is life, and that’s what we did.”

Slaughter‘s second solo album, “Halfway There”, was released in 2017 via EMP Label Group.

SLAUGHTER has not released a studio album since 1999’s “Back To Reality”.