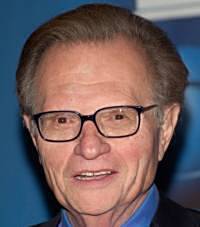 
Longtime radio and television host LARRY KING passed away early SATURDAY morning (1/23) at CEDARS-SINAI MEDICAL CENTER in LOS ANGELES. He as 87 and had been battling COVID-19. His death was announced on his TWITTER account by ORA TV.

KING, a BROOKLYN native born LAWRENCE ZEIGER, began his career at WAHR-A/MIAMI in 1957, moved to WKAT in 1958, back to WAHR (renamed WAME) in 1961, and joined WIOD-A in 1963. He also worked in television at WPST-TV/WLBW-TV and WTVJ (TV), and as color commentator for MIAMI DOLPHINS football in 1970-71. In 1978, KING went national as host of the overnight slot on MUTUAL BROADCASTING SYSTEM, becoming well-known for his interviews and “Open Phone AMERICA” segments. After moving to afternoons for a year, the show ended in 1994.

Meanwhile, KING also hosted his signature television show “LARRY KING LIVE” on CNN from 1985 through 2010, with the audio simulcasted by WESTWOOD ONE for radio through 2009. His USA TODAY column, random thoughts separated by ellipses, was an often-parodied staple of GANNETT’s national newspaper from 1982 through 2001.

In later years, KING hosted “LARRY KING NOW” on the online ORA TV, HULU, and RT AMERICA, and a weekly political talk show “POLITICKING WITH LARRY KING” on RT AMERICA, along with infomercials. He was married eight times to seven women, with five children, nine grandchildren, and four great-grandchildren.