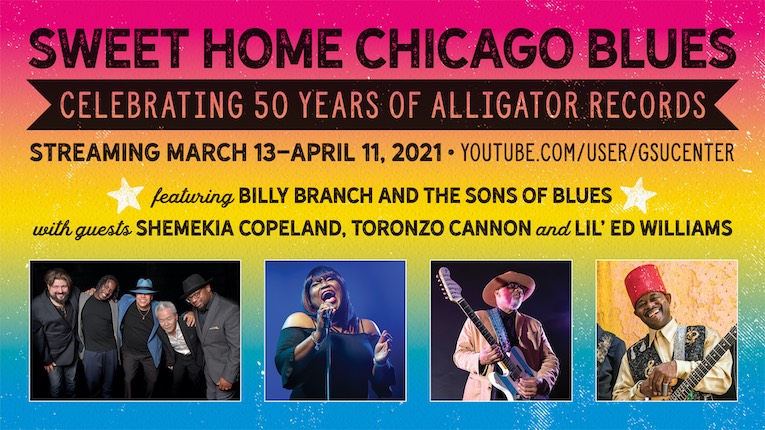 The once-in-a-lifetime event will be recorded on the Center’s stage to its empty 1171 seat house. This concert is part of the Center’s 25th anniversary celebration. The show will debut as a ticketed streaming event at 7:00PM Central time on March 13, 2021, and will be available to watch on demand through April 11. The event will stream on the Center’s YouTube channel: For tickets and more information, click here. 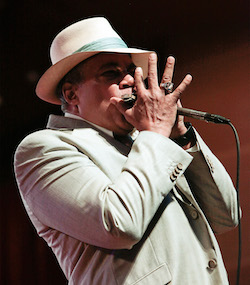 Blues giant Billy Branch is hailed internationally as one of today’s greatest harmonica players. The New York Times says, “Branch has a warm, open vocal style and a full command of the blues harp, from wailing notes to chugging rhythms.” With his inventive, deeply rooted playing and gritty, soulful vocals, Branch carries on the Chicago blues tradition that he learned first-hand from icons including Big Walter Horton, James Cotton, Junior Wells, Carey Bell, Willie Dixon and many others. With his instantly recognizable sound and his band, The Sons of Blues, Branch has traveled the world, delivering his signature brand of Chicago blues for over four decades. Branch’s latest album is 2019’s Roots & Branches: The Songs of Little Walter. The album finds Branch and his band boldly reimagining the renowned songs of Little Walter Jacobs. Jacobs was one of the principal architects of the Chicago blues sound and one of the most influential blues harmonica players who ever lived. Living Blues says, “Billy Branch has cemented his place among the kings. Chugging, incessant blues and R&B…greasy, funky, howlin’ harp attack that really burns. Wonderful, bold and surprising.” This concert marks Branch’s third appearance at the Center. 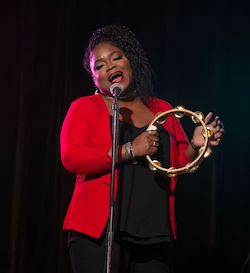 When Shemekia Copeland first broke on the scene with her groundbreaking Alligator Records debut CD Turn the Heat Up in 1998, she instantly became a blues and R&B force to be reckoned with. The Chicago Tribune says, “Shemekia Copeland is the greatest female blues singer working today.” News outlets from The New York Times to CNN have praised Copeland’s talent, larger-than-life personality, dynamic, authoritative voice and true star power. Shemekia has earned three Grammy Award nominations, 12 Blues Music Awards and a host of Living Blues Awards, including being named the 2020 Female Blues Artist of the Year. With her recent albums, Shemekia broadened her musical vision, melding blues with more rootsy, Americana sounds. Her new album, the soulful and uncompromising Uncivil War, tackles the problems of contemporary American life head on, with nuance, understanding, and a demand for change. It also brings Copeland’s fierce, sultry R&B fire to songs more personal than political. NPR’s All Things Considered says, “Copeland embodies the blues with her powerful vocal chops and fearless look at social issues.” No Depression declares, “Copeland pierces your soul. This is how you do it, and nobody does it better than Shemekia Copeland.” 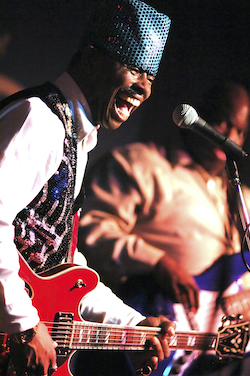 Slide guitar-playing blues master Lil’ Ed Williams, leader of Lil’ Ed & The Blues Imperials, comes to the blues naturally. His uncle, Chicago slide guitar king and master songwriter J.B. Hutto, taught him how to feel, not just play the blues. Living Blues says, “Lil’ Ed plays rough and ready blues with unmitigated intensity…swirling, snarling, riveting slide…scorching and soulful, joyous and stomping.” With nine albums and thousands of performances under his belt, Lil’ Ed is now universally hailed as a giant of the genre. The Associated Press says, “Williams fills Chicago’s biggest shoes with more life and heat than anyone on stage today.” With his latest album, 2016’s The Big Sound Of Lil’ Ed & The Blues Imperials, Lil’ Ed continues to bring his blistering Chicago blues to fans new and old. His infectious energy, joyful showmanship and masterful playing have been honed to a razor’s edge. The Chicago Tribune says, “Electrifying, raucous, pure Chicago blues….Lil’ Ed is a guitarist extraordinaire…slashing slide and flamboyant stage persona.” 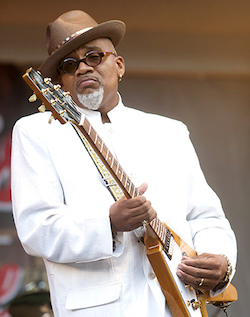 Upon release of his Alligator Records debut, The Chicago Way in 2016, Toronzo Cannon burst onto the international stage as one of the most electrifying bluesmen to emerge from Chicago in decades. The Chicago Reader said, “Bluesman Toronzo Cannon is one of Chicago’s finest string-bending storytellers.” He has played major cities all over the U.S., Canada, and Europe, including stops in the UK, Germany, Spain, France, Sweden, Switzerland, Italy, Denmark, Finland, Belgium, Poland and Japan, delighting and surprising audiences with one unforgettable gig after another. He has played the Chicago Blues Festival on ten separate occasions. UK tastemaker music magazine MOJO named his latest album, 2019’s The Preacher, The Politician Or The Pimp, the #2 Best Blues Album Of 2019. Chicago’s New city and Reader both named Cannon among the city’s greatest musicians. Blues Music Magazine says, “Cannon has all the fire and spontaneity of the Chicago legends. His songwriting is a timely and original look at the world, and his assertive voice is the perfect vehicle to deliver the message.”

The seed of “Sweet Home Chicago – An Online Blues Celebration” sprouted pre-COVID at an Andersonville diner in Chicago, when the Center’s Director Lana Rogachevskaya and Iglauer explored how to celebrate their upcoming institutional birthdays and share their passion for the blues with a larger Chicago community. This conversation reemerged in 2020 with an additional goal of employing Chicago artists, while serving blues fans from all over the globe.

Rogachevskaya says, “Blues is a feeling. A musical genre with origins in American slavery and Jim Crow, its continued popularity is in its universal appeal. Communally held and lived through, blues uplifts, nourishes, and sustains the human soul.  Sweet Home Chicago Blues participants will feel the healing power of blues sounds and stories while being together.”

According to Alligator Records founder and president Bruce Iglauer, “Chicago Blues is the famous musical signature of the city. This exhilarating music — music that grew up on the city’s South and West Sides — has become Chicago’s most vibrant and honored cultural export, reaching a worldwide audience. This concert will be a celebration of the city’s heritage, featuring some of the most talented and exciting blues artists in the world.”