Two weeks ahead of Independent Venue Week, Dry Cleaning made ‘Britain’s Best Small Venue 2015’ (NME) the second port of call on their 2020 tour. Supported by Sinead O’Brien, the South-East London four-piece made their way from Bedford Esquires, where they kicked off their latest tour on the previous night, to the South-East seaside town of Ramsgate. 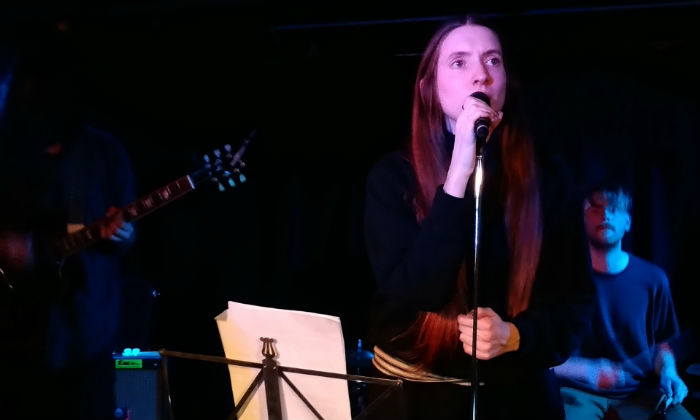 The diminutive Sinead O’Brien, accompanied by Julian Hanson on guitar and Oscar Robertson on drums, kicked off the night in her own very individual style. The poet performer, aptly enough from Limerick, showcased her spoken-word like songs brilliantly as she piqued the interest of the curious audience. Dressed elegantly in an all black trouser suit with some extremely pointed petite boots, Sinead gave a memorable performance highlighted by her distinctive voice. The intonation and phrasing of O’Brien’s vocal was delightful and framed her creative and well-versed lyrics incredibly well. Her eloquent and articulate performance included new track ‘Post Modern Painting’, last year’s September and October singles ‘A Thing You Call Joy’ and ‘Limbo’, and finally ‘Taking On Time’.

Dry Cleaning set themselves up on the compact stage of the Ramsgate Music Hall, including doubling up on water and Kleenex, for lead singer Florence Shaw. The Eltham quartet, formed after the break-up of La Shark and the inspired recruitment of University Lecturer Shaw, played a succinct set of eleven songs to an appreciative, if not quite sold-out, crowd.

Last year’s six-track EP ‘Boundary Road Snacks And Drinks’ gave rise to the first two tracks of the night, ‘Spoils’ and ‘Dog Proposal’. The latter came with a special dedication ahead of the performance. “This one’s especially for Freya and Ellie, two very important guests at the show this evening”. The two young girls, sporting some very jazzy ear defenders, had clearly been given special dispensation to be allowed out on a school night! Lewis Maynard’s walking bassline and Nick Buxton’s tight rhythm section complemented Tom Dowse’s revolving guitar hook as Florence delivered her acutely observed lyrics in her inimitable, almost dead-pan fashion.

‘New Job’, from the band’s previous EP ‘Sweet Princess’, was next as they ramped up the BPM to deliver one of the hardest hitting tracks of the night. Buxton’s driving drum beat combined with the high riffs of Dowse played out superbly in the confines of the compact Ramsgate venue. The insult-trading ‘Phone Scam’ set up a lively, toe-tapping, lyrically superlative ‘Goodnight’ (“She said, have you ever spat c*m onto the carpet of a Travelodge”, has to be one of the most arresting lines of last year) before the near sing-a-long opportunity of ‘Viking Hair’.

Shaw’s ability to capture, or steal or recognise, a phrase and re-present it along with other seemingly random anecdotes is what sets Dry Cleaning apart from many other bands. Yes, the soundtrack is compelling, very well delivered, full of hooks and ear worms but it is the lyrical prowess of Florence Shaw that makes Dry Cleaning something rather special. Her understated delivery with a hint of a smouldering soulful undercurrent is the perfect vehicle for her very creative and inspired words. “You’re nothing but a fragrance to me now”, Shaw sings as she imparts the tale of a failed relationship in ‘Sit Down Meal’. While the guitar whirls around her, the bass rumbles on and the drums pound out the beat Shaw remains calm and centred throughout as if somehow deliberately detached and distant giving yet more gravitas to the performance.

Dry Cleaning played one new, as yet unreleased, song on the night, ‘Unsmart Lady’. With a fevered drum roll from Nick, who was playing through an injury to his hands incurred earlier in the week, Dry Cleaning unleashed another potent song on the audience. “Don’t mess it up”, came a shout from the partisan crowd. Penultimately, and poignantly, on the eve of the ‘Sandringham Summit’, Dry Cleaning played arguably their biggest song to date, ‘Magic Of Meghan’. The two youngest members of the audience clearly enjoyed this song, in appreciation of Meghan Markle, the most. As Shaw whooped her way through the song. “She’s a smasher, perfectly suited to the roll… Just what England needs, you’re going to change us.”

Florence and her band closed out the night and their set with another track from ‘Sweet Princess’, ‘Conversation’. Shaw’s ability to deliver the trill of the phone ringing was something quite amazing in itself! On the Kent coast Dry Cleaning gave a great account of themselves highlighting why they are garnering so much attention and critical acclaim. Their collective musical artistry is something quite extraordinary and the fascinating lyrical construction that Shaw has made her own is nothing short of genius at times. A short but very sweet set from a band that are surely destined for bigger and better things.

5 Albums I Can’t Live Without: Dan Reynolds of Imagine Dragons