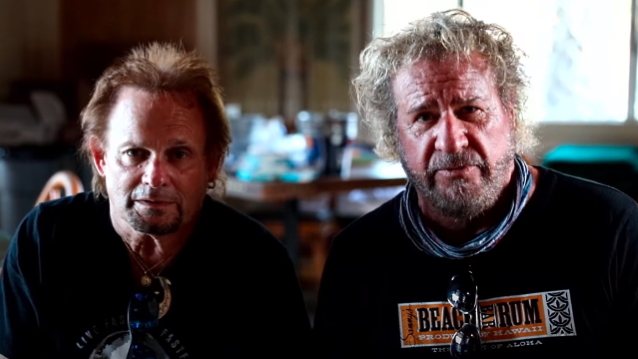 In a new interview with New York’s Q104.3 radio station, former VAN HALEN members Sammy Hagar and Michael Anthony were asked if there any plans to organize a tribute show in honor of their longtime bandmate, VAN HALEN guitarist Eddie Van Halen, who died last October. Sammy responded (see video below): “It’s gotta happen. Of course it’s gonna happen. No one’s really connected all the dots with everyone involved, but I have been told, and I have read interviews with various people involved — with Wolfie [Eddie‘s son Wolfgang Van Halen] and Valerie [Bertinelli, Eddie‘s ex-wife] and Eddie‘s wife [Janie] that he was married to at the time — they all said as soon as this is over, we’re gonna get everybody together and do a tribute or whatever; just a ‘thank you,’ a goodbye, a send-off. And that’s an absolute must. I don’t care if it takes 10 years — that will happen. And if we’re available to do it, we’ll do it.” Michael added: “We’ve got to celebrate the music — so much good music.”

During the same chat, Wolfgang once again shot down a rumor that a new version of VAN HALEN could be assembled featuring him on guitar in place of his late father. In October, a rumor started to make the rounds via a Wolfgang Van Halen private group on Facebook that the VAN HALEN “camp” was discussing the possibility of the band carrying with a revamped lineup that would consist of Hagar on vocals, Anthony on bass, Alex Van Halen on drums and Wolfgang on guitar. Furthermore, it was suggested that Eddie Van Halen told his son and brother “I give you my blessing” with regard to the prospect of VAN HALEN continuing without him.

“No way. That’ll never happen,” Wolfgang told Entertainment Tonight. “I think a message to the VAN HALEN fans [would be that] some things just really suck. I don’t have a dad anymore and I have to figure out how to process that and deal with it. And, that’s the process that VAN HALEN fans need to go through and realize that you can’t have the band anymore without Eddie Van Halen. The music will live on forever, but you can’t have [the band] without him. Impossible.

“My dad would probably be really pissed off at me if I [tried to take his place,]” Wolfgang added. “He’d probably be, like, ‘What are you doing playing my stuff? Go do your stuff.’ He would’ve been really upset, like, ‘You have all this music you’re sitting on. Why wouldn’t you go forward with that?'”

Sammy, Eddie, Alex and Michael last teamed up in 2004 for a U.S. summer tour. In exchange for taking part in the tour, Anthony reportedly had to agree to take a pay cut and sign away his rights to the band name and logo.

In early 2019, rumors were rampant that the classic-era lineup of VAN HALEN would reunite for the first time since 1984. It has since been revealed that a health setback involving Eddie was responsible for the tour not materializing.

The iconic VAN HALEN axeman passed away from complications due to cancer, his son confirmed.

Hagar and Anthony are currently members of SAMMY HAGAR & THE CIRCLE which released its massively popular “Lockdown Sessions” as an album collection titled “Lockdown 2020” on January 8.