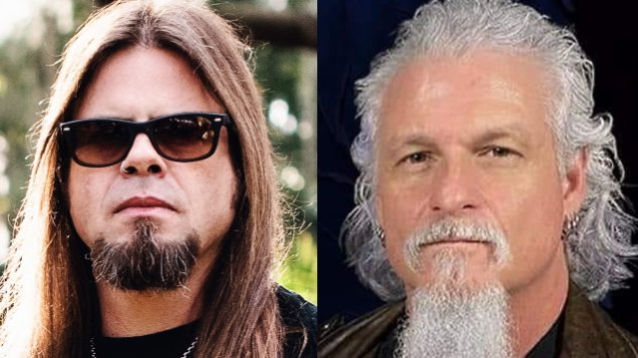 QUEENSRŸCHE frontman Todd La Torre says that he was “shocked” but “not really surprised” by last week’s revelation that ICED EARTH leader Jon Schaffer is among dozens of people wanted by the FBI for storming Capitol Hill.

On Friday, the FBI‘s Washington Field Office released 40 photos of people who are suspected of unlawful entry during a violent insurrection at the U.S. Capitol carried out on January 6 during the final Congressional vote recording for the 2020 general election. Among them was a picture of Schaffer taken by Roberto Schmidt of AFP. In the photo, Schaffer can be seen at the front of a mob, sporting a hat from Oath Keepers, an anti-government militia group, and pointing his finger while yelling at someone out of the frame.

“Somebody showed me a photograph, and they didn’t say anything — they just showed me the picture,” Todd said during an interview with the “Talking With Mark Strigl” podcast (hear audio below). “And I text back, ‘Jon Schaffer?’ And then I said, ‘That’s Jon. I know it is.’ But I didn’t have confirmation, but I was, like, ‘I know it’s him.’ And then it was revealed, yes, that’s him. And I was, like, ‘Holy shit.’

“I know some of his viewpoints on things,” La Torre continued. “On the one hand, it’s shocking, ’cause you’re, like, ‘Holy shit. I’m friends with this guy.’ And then on the other hand, you’re, like, ‘I’m not really surprised.’ Because if you know how he thinks about the government and different things, you’re, like, okay, it’s not far-fetched that he would be there. At the same time, you’re thinking, wow, this has never happened in my lifetime, or any of our lifetimes, where we’ve seen people storm the Capitol and literally assault… These are the same people that are saying ‘Back The Blue’ and ‘We Support Our Police.’ And then I’m watching people fighting and trying to beat up police officers, ’cause they think the election is rigged. That’s not where I stand. I was, like, ‘Holy crap!’ And, of course, all the circles of people that we know each other, we’re all, like, ‘Holy shit. That’s Jon.’ Then it was [revealed that he was] wanted by the FBI. And I was, like, ‘Holy crap!’

“I have no idea if he’s turned himself in, if he’s on the run, if they got him — I have no idea, ’cause I haven’t communicated with him at all,” Todd clarified. “But the band is taking a severe — there’s a lot of backlash [against ICED EARTH].

“Jon‘s a man of his convictions,” La Torre added. “I don’t wanna comment one way or the other, other than the fact that, yeah, I know him, and the times that we’ve been around each other, he’s always been respectful to me, but, of course, that’s in a music situation. I think we have polarizing views on how we see things.”

On Friday, German daily newspaper Die Welt uploaded a video interview it conducted with Schaffer last November at a Washington, D.C. demonstration supporting Trump and protesting the 2020 presidential election results. In the chat, the 52-year-old musician said that “a group of thugs and criminals hijacked this country a long time ago” and warned that “they’re messing with the wrong people here. Because now we see you, and you’re going down. Mark my words.”

Schaffer also seemingly threw his support behind Trump, saying “he’s not your typical Republican” and claiming that America’s 45th president is “dealing with a criminal mafia that has been in the shadows running the world, frankly, for a very long time. They wanna destroy all of our sovereignty and bring about global government,” he added. “We’re not having it… It will not happen. There will be a lot of blood shed, if it comes down to that — trust me. The American people will not go for that bullshit — once they understand what’s actually happening. So, that’s where we’re at. Nobody wants this, but they’re pushing us to a point where we have no choice.”

Back in 2009, Schaffer raised eyebrows when he launched his SONS OF LIBERTY project via an appearance on a radio show hosted by far-right conspiracy theorist Alex Jones.

More recently, Schaffer voiced his controversial views on the coronavirus crisis during an interview with MetalSucks‘s “The Quarantinecast”, claiming that COVID-19 is “a psychological warfare campaign on the people more than it is a serious pandemic.” Implying that a shadowy cabal of elites is using a global crisis as a cover to profiteer and entrench their power, Schaffer said: “I think there’s a lot more going on than meets the eye here — in fact, I know there is. Legitimate doctors and scientists are being censored and banned on YouTube constantly. It’s unbelievable levels of fraud.”

In a September 2020 Facebook Live chat, Schaffer said that he didn’t trust his government. “I don’t give a shit if it’s an ‘R’ or a ‘D’ next to the name of the person,” he explained. “You can’t put your hope into one president or one person, or a mayor or a governor or whatever. You’ve gotta be out there and actively put pressure on these people, let ’em know you’re paying attention. If you’re not paying attention, they’re gonna rob you and steal everything. Your freedom too. Not just your money. They’re gonna steal your fucking freedom. ‘Cause they’re a bunch of sick control freaks.”