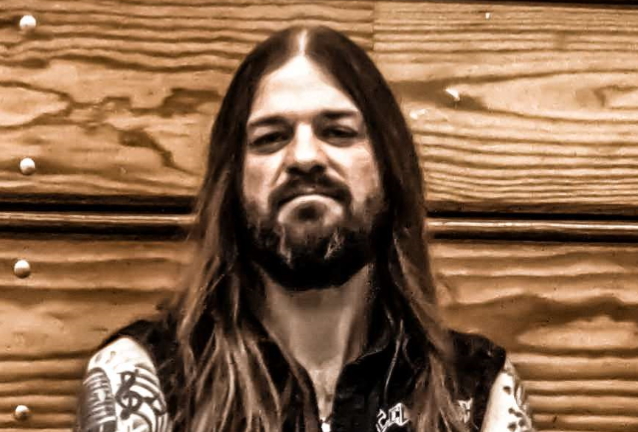 ICED EARTH singer Stu Block has clarified a social media post he made last week that suggested he was supporting the insurrection at the U.S. Capitol.

On January 6, Stu, the Canadian-born vocalist who has fronted ICED EARTH since 2011, appeared to take pleasure in the grim images out of Washington during the pro-Donald Trump riot on Capitol Hill, writing in a since-deleted post on his Facebook page: “Oh it’s happening! History in the making. Sending love to my friends in the US and all over the world!” When a follower asked if he was “condemning what happened,” Block responded, “And where in my statement would you get that impression?”

In the last few days, as news outlets published more and more videos, photos and testimonials from the riot on Capitol Hill, including a widely circulated photo of ICED EARTH guitarist Jon Schaffer inside the Capitol building, a number of people posted a screenshot of the singer’s original post, with some of them accusing Block of secretly backing last week’s rioters, mayhem and violence. The situation grew more confusing after Schaffer‘s ICED EARTH bandmates issued a collective statement on Saturday (January 9) distancing themselves from the violence and destruction of property at the Capitol building.

Earlier today, Block released a personal statement via social media clarifying his position on last week’s events and insisting that he “absolutely” does not condone or support “any acts of violence or anything else that any protester or rioter was involved in on January 6.”

Block wrote: “First I want to thank everyone for the amazing support you have shown. Unfortunately It has come to my attention in recent days about a screenshot someone made. There were some very obsessive hateful people posting the screenshot that I did have to remove from my social media.

“I do want to extend my apologies for the poor way I worded two Facebook posts on January the 6th. I’m human and I make mistakes. My wording was absolutely misunderstood and not properly thought out on my part and I know people and media can interpret things differently.

“At that moment I saw a historical thing happening that perhaps would cause divide amongst people everywhere so I sent love out to everyone as well. I quickly took the post down after I realized that the post I put up with good intentions to encourage discussion about what was happening at that moment was severely misinterpreted by some. This was all happening before I found out about the horrible line that was crossed that day by protesters. I also carelessly misread a comment someone posted on my official Facebook page and replied incorrectly and for that I am sorry. I was in the heat of the moment. In the post, the commenter said: ‘Are you condemning what happened today Stu?’ I replied: ‘and where in my statement would you get that impression?’ In the craziness of responding to so many comments, some very hateful in nature which were also coming at me in rapid fire, I read the word as ‘condoning’ which I DO NOT!!

“I see that this inaccurate misinterpreted screenshot has been shared on various social media pages and I want to go on record to say this AGAIN:

I absolutely DO NOT condone nor do I support ANY acts of violence or anything else that ANY protester or rioter was involved in on January 6th at the US Capitol building.

“If you follow me, you know I am generally a man of Peace, Kitties and Music. I do believe in peaceful protest and expressing your grievances , I believe in questioning authority when it’s appropriate, but I also believe that it should be done in a peaceful, respectful and intellectual manner and within the confines of the law.

“Again I apologize for any confusion. That’s it that’s all. I have been and will be taking a social media break and this is the only time I will ever address this inaccurate misinterpreted screenshot.

“Much Love and Stay Strong.”

A photo of Schaffer storming the Capitol building was posted online and he is now among the “persons of interest” sought for “unrest-related offenses” by the Metropolitan Police in Washington, D.C. In the photo, Schaffer can be seen at the front of a mob, sporting a hat from Oath Keepers, an anti-government militia group, and pointing his finger pointed while yelling at someone out of the frame.

Block — formerly of INTO ETERNITY — made his live debut with ICED EARTH in November 2011. 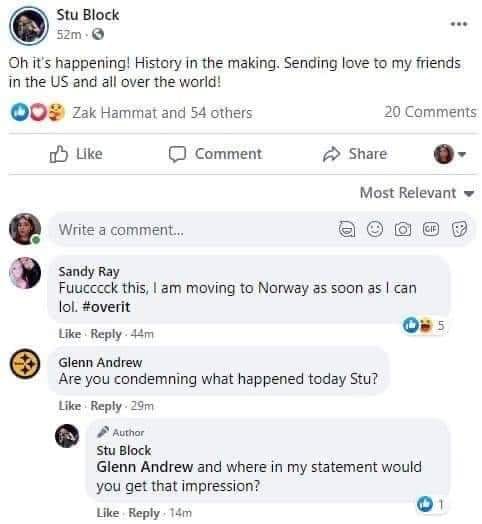 First I want to thank everyone for the amazing support you have shown. Unfortunately It has come to my attention in…