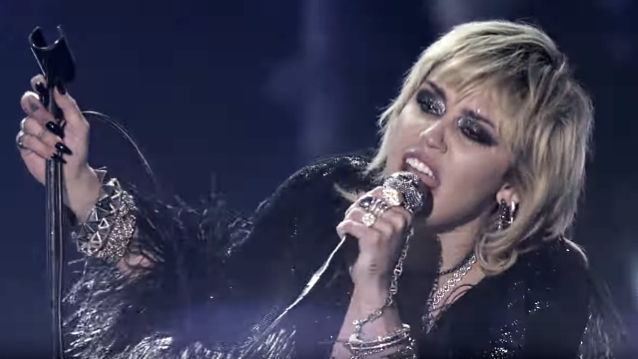 Miley Cyrus has collaborated with Elton John on a cover of METALLICA‘s “Nothing Else Matters”.

The pop star discussed the project during an appearance on the U.K. radio show “Capital Breakfast With Roman Kemp”. She said: “I did a METALLICA cover of ‘Nothing Else Matters’ featuring Elton John on piano. I’ve got Yo-Yo Ma, Chad Smith — so many all-stars.

“I’m so excited about this collaboration. Andrew Watt produced it, and I’m really stoked. I mean, having Elton John and METALLICA and me — I love it when ingredients don’t quite fit.”

Cyrus previously said she was working on an album of METALLICA covers last October.

A year earlier, Miley performed her version of “Nothing Else Matters” at U.K.’s Glastonbury festival.

Cyrus‘s rendition of the METALLICA classic — which can be heard below — came five months after drummer Lars Ulrich said that he was “stunned” by her take on TEMPLE OF THE DOG‘s “Say Hello 2 Heaven” at the “I Am The Highway: A Tribute To Chris Cornell” concert at the Forum in Los Angeles.

Back in January 2019, Ulrich took to his Instagram to post a photo of him backstage with Cyrus, along with the message: “Still stunned by your next level version of ‘Say Hello 2 Heaven’ for Chris! Beyond inspiring.”