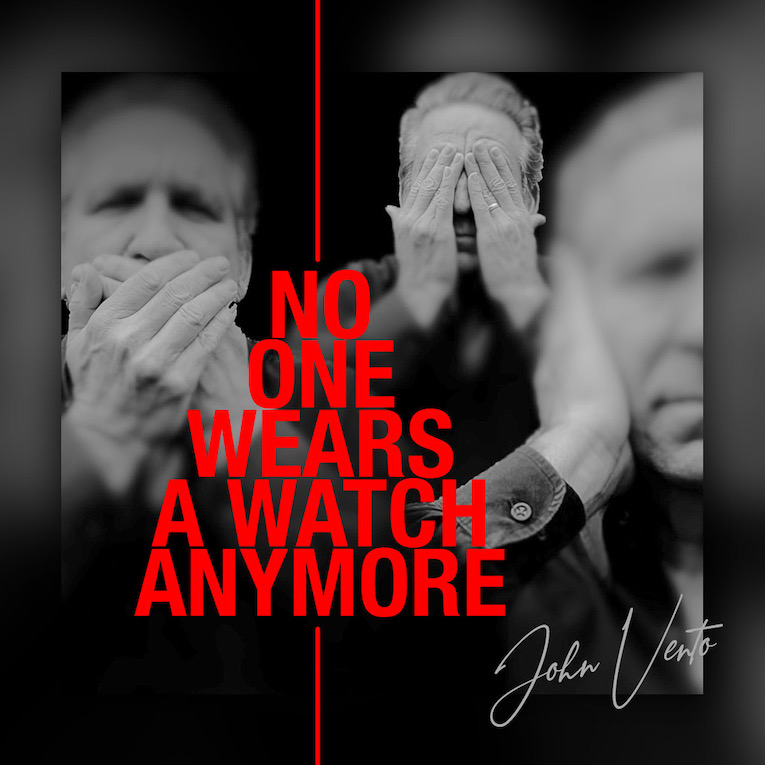 With 2020 square in the rearview mirror, Pittsburgh music veteran John Vento has kicked off the New Year with a new single and video. “No One Wears A Watch Anymore” is the third single from his year-long opus, Brick By Brick.

John Vento is best known as the front man for the high-energy rhythm and blues group, The Nied’s Hotel Band. NHB is a collection of great players that has built a stellar reputation for killer original music and live performances. Brick By Brick is a departure from his previous work. The album will not be completed until 2022 and in November 2021, Vento started releasing new singles on a monthly basis.

Watch “No One Wears A Watch Anymore”

Order link for “No One Wears A Watch Anymore”

John Vento is often called a chameleon in the Pittsburgh music scene. Unable to pigeonhole him into a particular musical style, he’s considered a versatile musician with varied music tastes. After all, the front man for the high-energy, hard-rockin’ bands, The Businessmen, and the Nied’s Hotel Band, is also known for his introspective, brooding solo recordings.

Rather than a drawback, however, Vento considers such diversity to be among his strengths; and his fans agree. They relish sharing his tumultuous trek toward achieving his artistic vision, which he accomplishes by channeling a blend of eclectic influences through his own, raw emotions.

Helping to engineer the roller coaster ride for Brick By Brick is a solid core of collaborators, including John Randall Fox, Buddy Hall, Tim Hadley, and Frank Ferraro, along with renowned playwright/lyricist, Amy Hartman. Many members of this crew have been with him for more than a decade and it’s easy to understand why. Though a one-of-a-kind performer, he professes a great distaste for the word, “solo,” insisting that, “Without my collaborators, I would not have accomplished anything.”

John Vento’s 2019 MTS release is “Love, Lust and Other Wreckage.” The album received the IMEA Award for Best Americana Album. His single, “Rainbows And Lightning” reached the Top 20 on iTunes Canada charts, receiving national and international airplay and charting. His follow-ups, “Baby Blues,” “Humble Way,” and current single, “I Hope I Don’t Fall in Love with You” (Tom Waits cover) have also received national airplay chart attention.  John is a January 2019 Billboard Magazine Emerging Artist and a Communitas Award Winner for his work with non-profit, Band Together Pittsburgh.

Once again Vento collaborated with his good friend and artist, Frank Ferraro. Vento says, “I came across Frank’s lyrics quite accidently through an email exchange of some rough sketches that he was working on. The lyrics jumped off the page and I immediately asked for, and received permission to use Frank’s words for a potential new song. I wanted to record a more upbeat groove type of song for my new project (Brick by Brick), and the line (No One Wears A Watch Anymore) was just the perfect hook for such a composition. Once I brought my ideas to guitarists David Granati and Bob Zigerelli, things came together quickly. ”

Ferraro adds, “I wrote these lyrics using metaphors, to reflect the chaos happening all around us in the world and to ask the question, ‘Are we truly aware of the not so simple times we are living in and its consequences?”