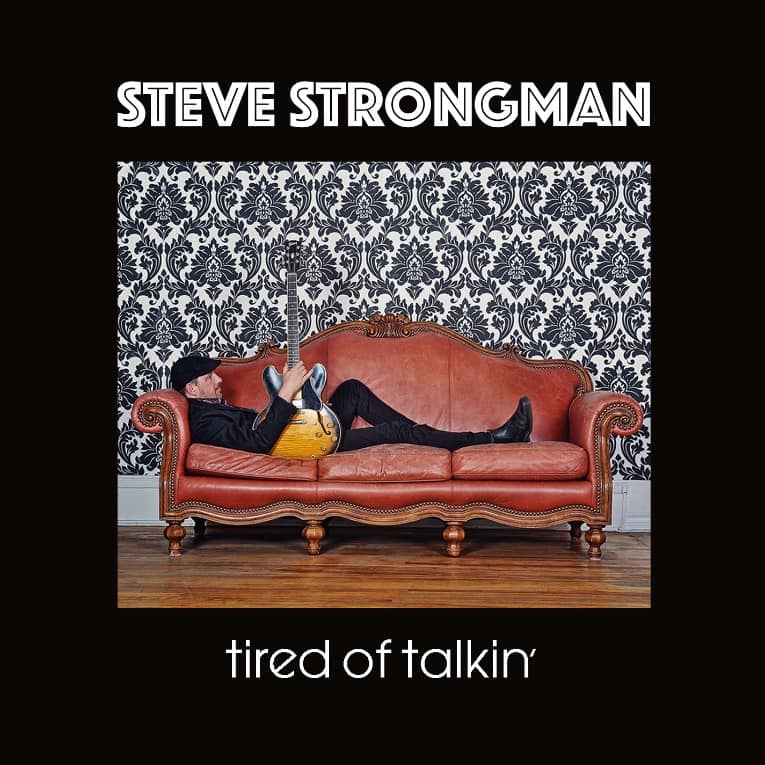 Canadian award-winning blues singer, songwriter and guitarist Steve Strongman has long been appreciated in his home country and beyond as a dedicated, talented and versatile musician. Multiple Maple Blues Awards and a notable Juno Award for Blues Recording of the Year add to a résumé which includes stints opening for B. B. King, Buddy Guy and Johnny Winters. That said, it’s great to see Strongman’s 2019 release Tired of Talkin’ receive a much-warranted global reissue on the Stony Plains label out January 15, 2021.

Tired of Talkin’ is Strongman’s seventh album, recorded in Hamilton, Ontario and Nashville, with an interesting group of players. Alongside Strongman, who plays electric, acoustic, dobro and harmonica, we have Dave King (whose credits include work with T Bone Burnette, Ben E. King and more) on drums and highly-regarded bassist Colin Lapsley. For the Nashville sessions, the personnel includes Pat Sansone (Wilco), guitarist Audley Freed (Black Crowes), plus the ever-reliable Jesse O’Brien (piano) and James Haggety (bass). Background vocals are provided by Ella and Scarlett Strongman.

Eleven of the twelve tracks are either written or co-written by Strongman, kicking off with title-track, “Tired Of Talkin,’ a swaggering blues-rocker which pounds joyfully with plenty of muscle and more than a little good-natured humour. “You got the kind of look, really knocking me out,” sings Strongman. For all his guitar mastery, Strongman’s vocals are equally impressive, powerful and expressive. The band gels nicely, with some beautiful piano reminiscent of Ian Stewart’s exceptional contributions to the Rolling Stones.

“Still Crazy ‘Bout You” is a charming mid-tempo number. “I climb the walls over some things you do,” sings Strongman. This is a standout track, with slide-guitar ornamentation, skipping cymbals and a solid, highly likeable song-structure. “Can’t Have It All” is jet-propelled electric blues, underpinned by frantic harmonica. The song shuffles across the stage like James Brown, jumping and jiving. “If I can’t have it all, I’ll take just a little bit.” King’s drums are something special, hard-driving but with more than a hint of swing. “Livin’ The Dream” is another reminder of Strongman’s versatility in terms of material. This is a lovely, bouncing, Springsteen-like rocker, immensely approachable but with enough twist and verve to warrant repeated listens.

Production on Tired Of Talkin’ is clean and unobtrusive and nicely balanced. Everything is polished and clear, but not too polished and clear. At its most ebullient moments, a little bleeding is allowed, so that the instruments and vocals swirl together in kinetic fashion. On more laid-back tracks, such as the moving, acoustic-guitar-driven “That Kind Of Fight” more space is allowed, creating an airy, floating feel. That particular song is a stand-out, a nicely-honed slower number full of pathos, with a subtle, nuanced arrangement.

“Highwayman,” by contrast, harks back to the earliest days of the blues, a moaning, wailing, hard-nosed lament full of woe, ringing, clanging guitar and classic, thrilling blues runs. This track eminently displays Strongman’s innate sense of timing, his communication skills and his affinity for Delta sounds. A cover of Al Green’s “Let’s Stay Together” closes the show, a honey-covered tribute to a wonderful song. Strongman and company manage to wrest something new from this classic, adding more blues tones to the feel.

For those new to Steve Strongman, Tired Of Talkin’ is a strong document of his considerable skills. Long-time fans will delight in this fine collection.

Order link for Tired of Talkin’