The first time I saw 3TEETH live was back in 2016 when they hit Bradford to perform the UK’s greatest industrial festival, Infest. After the stellar review I gave them, you can imagine my excitement when I saw that the Los Angeles industrial metal collective were back in my neck of the woods on their latest tour, this time hitting up The Key Club in nearby Leeds for the first time. 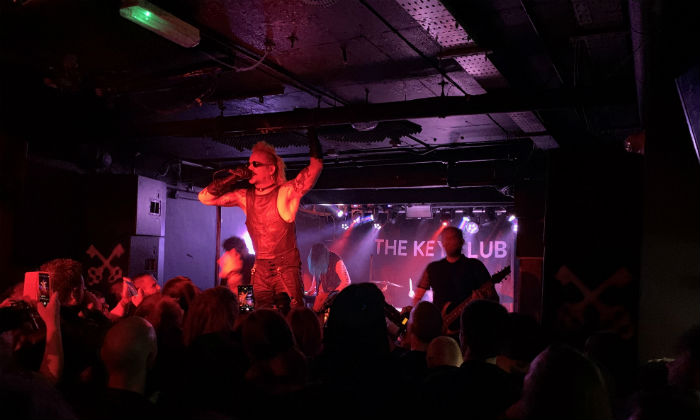 I was actually quite surprised to see them in such a modest venue after last year’s album release, Metawar. The record has become their most commercially successful so far, debuting at #28 on the iTunes Top Albums chart and #1 on iTunes Metal chart, as well as reaching #3 on Billboard’s Heatseekers Albums. They’ve toured with the likes of Tool, Rammstein, Danzig and HIM, and frankly ooze the kind of Rock God vibes you expect from their more renowned counterparts.

It’s that astounding charisma that makes them such an enjoyable live band. Frontman Lex Mincolla has this cyberpunk movie villain aesthetic about him with his trademark moustache, gloves, circular dark glasses and mohawk (inexplicably dyed blonde at the moment); he’s just so ineffably cool, it’s illegal. The future of the industrial circuit rests on that tache.

Unfortunately, that magnetism of Lex’s cast a shadow on the supporting act that opened the night. It was the first time I’d heard PIG but it felt like I was the only one. I was slightly bewildered by his less than dramatic entrance; he sort of lurked at the side of the stage as if half the room couldn’t see him hovering before bounding up to join his backing band. Not so smooth. I got strong KMFDM vibes from this guy, which is no surprise given that he has worked with the band in the past, with a few Nine Inch Nails elements thrown in for good measure.

There was nothing unique about him, but he has great stage presence even if things got a little cheesy. The room lapped him up, but faces soon started falling when they realised the band were playing a cover of KMFDM’s Juke Joint Jezebel which PIG actually co-wrote under his real name Raymond Watts. Having a history is one thing, but we’re not sure how we felt about him showing support to a band that have not only repeatedly had to deny having worrying right-wing beliefs, but have also only very recently seen their frontman Sascha Konietzko accused of making a homophobic comment towards Claus Larsen of Leæther Strip. Too soon, if ever, to be playing their music again.

Still, after cooling off from that unexpected and awkward affair, 3TEETH came out and raised our spirits again. They opened with Affluenza from Metawar and played damn near the whole album, highlights being American Landfill, Sell Your Face 2.0 and Exxxit. Lex pointed out before the unsettling Sell Your Face 2.0 (“Downloading death at the speed of life / Slice off your face with a digital knife“) the prevalence of CCTV in the city of Leeds, which is apparently even more extensive than in the States. There are a lot of socio-political themes in 3TEETH’s music, and their use of lyrics transforms the mundane reality of the world into a kind of creepy dystopian nightmare that is disturbingly closer to truth than we want to believe. American Landfill talks of “The camps decentralized so you never concentrate / Fixed upon the shiny prize that’s blinding to your fate“, and we just have chills thinking about it.

Songs from second album Shutdown.exe – including Shutdown, Atrophy, Slavegod and Insubstantia – were received equally as well, and then Metawar‘s President X became the encore, with the unexpected addition of a costume change for Lex. He was now wearing a Trump-esque suit with a red tie and a weird red lizard-man mask (a possible nod to reptilian elite conspiracy theories, because who knows?).

Listening to 3TEETH’s albums, you get more industrial vibes than metal, but their live performance brings a much more raw, metal edge to their sound, which is certainly not a bad thing for this reviewer. They were at the top of their game last night, and effortlessly likeable. Their set had a seductive synchronicity which just showed them at their peak. If any of the crowd were left disappointed, I wasn’t among them. Although I do agree with one particularly vocal member of the audience: I can’t quite get used to him as a blonde.