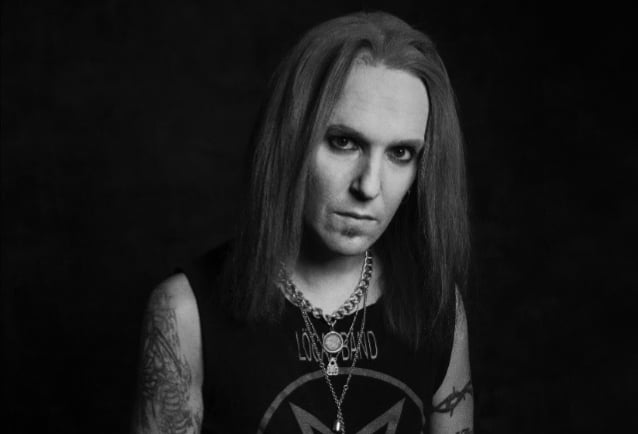 Former CHILDREN OF BODOM frontman Alexi Laiho has passed away. The Finnish guitarist/vocalist died in his home in Helsinki last week. The 41-year-old had suffered from long-term health issues in the years leading up to his death.

Laiho and drummer Jaska Raatikainen founded CHILDREN OF BODOM in 1993, and the band was one of the most internationally acclaimed metal acts in Finland up until their very last farewell concert in December of 2019. Last year, Alexi put together BODOM AFTER MIDNIGHT, who recorded three songs and shot one music video, which will be released later on posthumously.

Besides CHILDREN OF BODOM, Laiho was known for acts such as WARMEN, SINERGY, KYLÄHULLUT and THE LOCAL BAND. Awarded with a Metal Hammer Golden God and several other international prizes, the guitarist was also the main star, leading a group of one hundred guitar players at the Helsinki Festival in 2015 in “100 Guitars From Hel” — a massive concert piece he composed.

“We are crushed by the sudden passing of our dear friend and band member. Words cannot describe this shock and the profound sadness that we feel”, Daniel Freyberg, Mitja Toivonen and Waltteri Väyrynen from BODOM AFTER MIDNIGHT stated.

The talented guitarist and musician relished his role as stepdad in his family, and as uncle and godfather. Especially during the last years, the important family ties brought a welcomed balance to his life and the active touring. Laiho was particularly close with his big sister, parents and his sister’s daughter.

Laiho‘s sister said: “We are all absolutely shocked and devastated. We ask for privacy and understanding during these hard times. My little brother’s funeral will take place privately.”

Laiho will also be deeply missed by his family in Australia.

“Alexi was the most loving and magnificent husband and father. Our hearts are eternally broken”, Kelli Wright-Laiho said.

Laiho‘s CHILDREN OF BODOM bandmates Jaska Raatikainen (drums), Henri “Henkka T. Blacksmith” Seppälä (bass) and Janne Wirman (keyboards) said in a statement: “More than 25 years of friendship. We lost a brother. The world lost a phenomenal songwriter and one of the greatest guitarists of all time. Memories and Alexi‘s music will live forever. Our thoughts are with Alexi‘s family during this difficult time.”

BODOM AFTER MIDNIGHT made its live debut on October 23 at Rytmikorjaamo in Seinäjoki, Finland. The 17-song show consisted entirely of CHILDREN OF BODOM material.

CHILDREN OF BODOM played its final show on December 15, 2019 at the Black Box in Helsinki Ice Hall. A short time later, Finnish music magazine Soundi reported that the rights to the CHILDREN OF BODOM name are held by AA & Sewira Consulting Oy, the company owned by Raatikainen, Seppälä and Wirman. In June 2019, the trio filed an application with the National Board of Patents and Registration of Finland, and their application was subsequently granted for a five-year period starting on October 1, 2019. As a result, Laiho, who was CHILDREN OF BODOM‘s singer, guitarist and main songwriter, wasn’t authorized to use the band’s name without permission from Wirman, Raatikainen and Seppälä.

In November 2019, Laiho admitted to Helsingin Sanomat that there had been tensions in the BODOM camp for quite some time.

“The original decision [to end the band in its current form] came when the other guys said they just couldn’t do it anymore,” he said. “There were family reasons for it. I respect their decision. I myself have a wife and stepdaughter in Australia, and my wife understands my lifestyle. I’m pretty much gone [most of the time], but always I come back and I give them my all. Nothing is more important to me.”

According to Laiho, things came to a head when CHILDREN OF BODOM performed in Russia in October 2019.

“We fought a lot within the band, and I can honestly admit that those fights were mainly my fault,” he said. “They always started with some misunderstanding.”

Relations within the band apparently got so bad during the Russian tour that it looked as if CHILDREN OF BODOM would break up right there and then. But cooler heads prevailed, and the group decided that the shows in Finland would be their last with the most recent formation.

In a 2019 interview with Beatroute, Laiho said that the first single from CHILDREN OF BODOM‘s final album, “Hexed”, was written about his dangerous relationship with alcohol.

“‘Under Grass And Clover’ is about severe alcohol withdrawal, which is something I have definitely written about before, but not in recent years,” he said. “I don’t really drink like that anymore, but back in the day it was pretty hardcore. [While writing ‘Hexed’], I sort of went back in time and started remembering what it felt like to go through withdrawal and go through detox. It was just about remembering those horrible times. I don’t even drink on the road anymore. I cut back a ton, so I don’t get those feelings. I don’t want to fuckin’ feel like that ever again. I’d wake up and take a couple shots, not to get drunk, but just to keep an even keel and feel normal. It’s just fuckin’ sad. But in the beginning I didn’t think anything of it — it was normal.”

Laiho said that he no longer drank on tour and only consumed alcohol socially with friends at home.

“It still takes some willpower,” he said. “I know myself well enough to know I have an addictive personality. It doesn’t necessarily have to be booze — I can get addicted to walking, which I do a lot. Sometimes I work too hard, stuff like that. With beer, I just need to keep an eye on it.

“I think that’s the most important thing: admitting it,” he continued. “If you stay in denial, that’s not going to take you anywhere good in life. Admit it to yourself, know yourself, and keep an eye on yourself. I’ve been there, and I’ve seen people ruin their lives because of alcohol or drugs. Don’t get me wrong, I’m not a fuckin’ saint, and I’m not trying to preach here — people should do whatever the fuck they want. This just worked for me, that’s all. It’s actually pretty fucking great, not feeling so fuckin’ shitty every day.”

“Hexed” came out in March 2019 via Nuclear Blast Records.