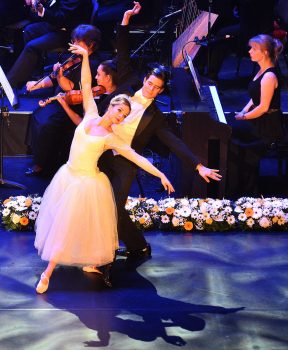 The New Year’s Concert from Vienna has become not only a tradition for residents and visitors to the Austrian capital, but also for millions of television viewers the world over. To bring the live experience to audiences, “A Salute to Vienna New Year’s Concert” makes its annual end-of-the-year tour to many North American cities, and features Austrian and other European singers, dancers, and musicians. The production usually lands locally at the Strathmore Music Center in Bethesda, Maryland. Such was not the case this year, owing to the ongoing Coronavirus pandemic. Nonetheless, the organizers of the event put on the concert at the Vigadó Theatre in Budapest by employing singers of the Budapest Operetta Theatre and hiring an orchestra and ballet dancers. The live program was then recorded while this was still possible, and “A Salute to Vienna and Budapest” went forward!

‘A Salute to Vienna and Budapest’ is a wonderful program with Viennese New Year’s spirit and Hungarian costume, dancing, and musical flair.

Andrea Warren of the project’s Marking and Project Development points out that while the production is “modelled after Vienna’s annual Neujahrskonzert,” it has a “dash more Hungarian flair and high energy” than previous touring concerts. It is important to note that Viennese operetta owes a great debt to its Hungarian composers, with Franz Lehár and Emmerich Kálmán well represented in any program of highlights from these operettas. The current production is no exception. Luscious examples are provided from “The Merry Widow” and “The Land of Smiles” by Lehár and “Gypsy Princess” to “Countess Maritza” by Kálmán.

The program opens with a more direct appeal to the New Year’s spirit via Johann Strauss, Jr. as the characters give champagne toasts in “Im Feuerstrom der Reben,” from “Die Fledermaus,” with soprano Mónika Fischl, tenor Péter Laki, and baritone Attila Erdos doing the honors and raising the spirit of New Year festivity. “Meine Lippen, sie küssen so heiss” from “Giuditta” by Franz Lehár is particularly outstanding, as it features Diána Kiss in an exotic performance for a true virtuoso of the art. The show stopper, “Dein ist mein ganzes Herz,” from “The Land of Smiles” by Franz Lehár is sung with power and emotion by tenor Zsolt Vadász. We begin to see some differences from a typically Viennese New Year’s concert in “Meine Liebe, deine Liebe.” While sung first in traditional style by engaging soprano, Szilvi Szendy, and ardent tenor, Péter Laki, the performance moves unexpectedly to the Charleston, a reminder that many staples of the operetta tradition are not from the 1800s as we assume but some from the 1920s. “The Land of Smiles,” for instance, dates from 1929.

As indicated above, the production is a bit more Hungarian in flavor than usual. “Hör’ ich Zimbalklänge” from “Gypsy Love” by Franz Lehár, featuring soprano, Fischl, is a case in point. The program notes poignantly: “Here the character sings that despite missing [her] beloved home of Hungary, its folk music and cymbals still resonate loudly in memory. It’s easy to relate to the homesick nostalgia of this song, especially this year, when so many of us were not able to return home to be with family this holiday season.”

The program is interspersed with stars of previous Salute to Vienna productions, giving the streaming audience their New Year’s greetings. The conductor is the flamboyant Alistair Willis, whose vibrant direction of the orchestra we enjoyed last year at Strathmore. Here, he is seen baking a Viennese apple strudel. The program is also introduced by the co-founders and producers of the “Salute to Vienna” North American tours, Attila and Marion Glatz, and it is lovely to make their acquaintance.

As all Viennese New Year’s concerts do, this program includes Strauss’ “Blue Danube Waltz,” featuring a tribute to the river which runs through Vienna and Budapest. It physically and musically connects the two cities for the purpose of the program. Another enjoyable Strauss waltz moment is “Frühlingsstimmen” or “Voices of Spring,” a piece Mónika Fischl sings lyrically and with verve. The waltz is famous, but it is not sung often. Noted from the program: “The lyrics are pastoral, and you don’t need to understand them to appreciate this showcase for the high coloratura soprano voice.” It would have been pleasant to enjoy the program even more with subtitles to the songs, something which could easily have been done in a recorded performance.

“A Salute to Vienna and Budapest” is a wonderful program with Viennese New Year’s spirit and Hungarian costume, dancing, and musical flair. This encourages us to look forward to next year, when it may be possible to attend in person again and say to the New Year 2022 in Viennese fashion, “Prosit Neujahr!”

The program, which ends on January 4, 2021, can be enjoyed by ordering tickets here.