HANNAH KERR SET TO APPEAR ON “THE 700 CLUB” CHRISTMAS DAY 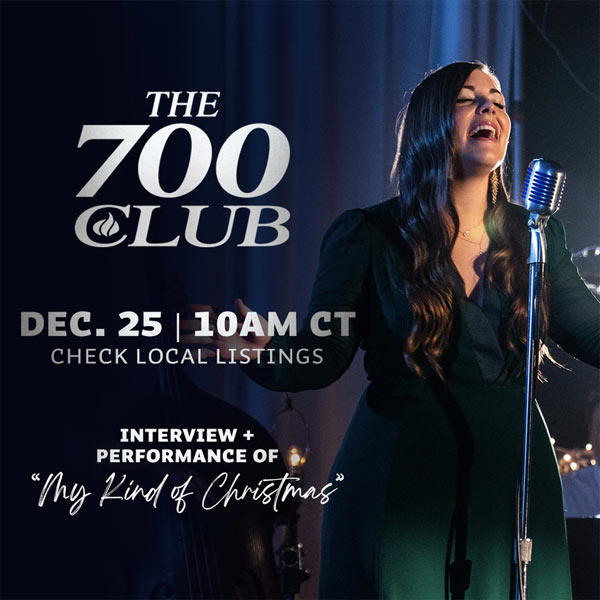 
Be sure not to miss singer/songwriter Hannah Kerr when she appears on “The 700 Club” Christmas Day. With a special performance of “My Kind of Christmas” along with an exclusive interview, click here to find out how to watch in your area.
Kerr recently appeared on GRAMMY.com’s “Positive Vibes Only ” series, which aims to affirm audiences everywhere as the country continues to face the COVID-19 pandemic and racial reckoning. “Positive Vibes Only” can be seen on GRAMMY.com and via the Recording Academy’s official YouTube channel, Facebook page and Instagram profile.
Additionally, don’t forget to check out Kerr’s special release of Christmas Eve In Bethlehem (Deluxe Edition), which adds to the 2018 10-song holiday project. The deluxe version offers five additional songs, including three originals co-written by Kerr, “Forever Evergreen,” “My Kind of Christmas,” and “Here To Stay,” featuring Cochren & Co. Christmas Eve In Bethlehem to date has garnered more than 20 million streams, including her take on the iconic “Winter Wonderland.”

ABOUT HANNAH KERR: Touted as a “compelling” and “encouraging” artist by CCM Magazine, artist/songwriter Hannah Kerr’s newest Christmas single “Here To Stay, featuring Michael Cochren of Cochren & Co is digitally available now on Black River Christian. In celebration of the second anniversary of her Christmas album Christmas Eve in Bethlehem, which has garnered more than 20 million streams, Kerr recorded a deluxe edition of the album featuring the new single along with four additional new songs, three of which are originals. Christmas Eve in Bethlehem (Deluxe Edition) is digitally available to stream and download here.
With more than 85 million total streams, Kerr’s released two full-length albums and two EPs, including her recent release Listen More, entirely co-written by Kerr, and featuring the Top 20 radio hit “Split the Sea,” and single “Ordinary.” Kerr made her debut in 2016 with the release of Overflow. This album earned her 20+ million streams and features her Top 15 hit “Warrior,” as well as her version of Matt Maher’s Top 5 hit “Your Love Defends Me.” Co-written by Kerr, “Your Love Defends Me” propelled her to win the award for Most Played Song award at the 2018 ASCAP Christian Awards. In addition to Kerr’s solo career, Hannah joined Michael Boggs to create Wildfire Worship Collective; a worship group also signed to Black River Christian in 2020. Their debut song “The Light (My Refuge)” is digitally available to stream and download.

Kerr has shared the stage with major Christian artists, including Casting Crowns, Matt Maher, Building 429, Jonny Diaz, Matt Hammitt, For KING & COUNTRY, Newsboys, and Kari Jobe, and was part of the 2019 K-LOVE Christmas Tour. A graduate of Belmont University with a degree in Christian Leadership, Hannah Kerr married songwriter/musician Jason Earley in March 2020 and they currently reside in Nashville, TN.