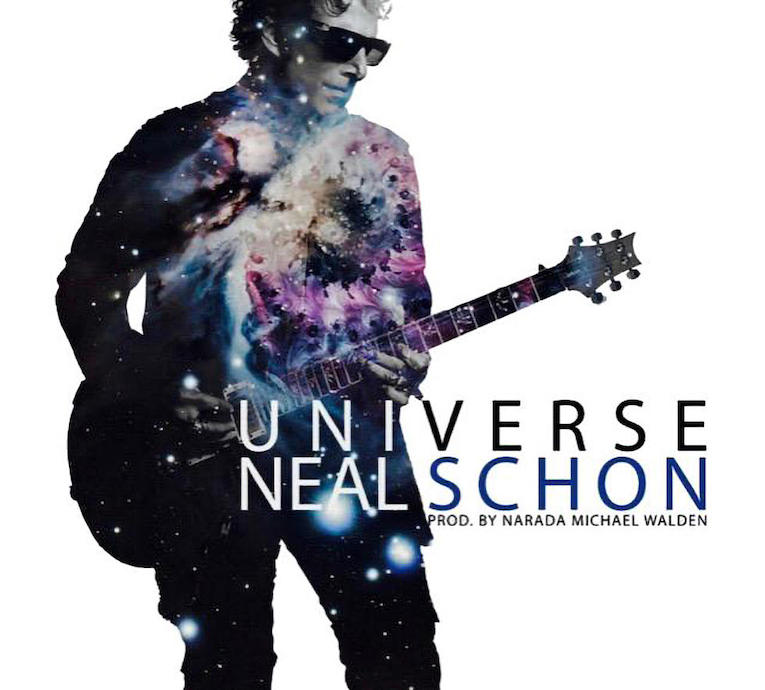 Master guitarist, Rock and Roll Hall of Fame inductee, and founder of Journey, Neal Schon is set to blow the world’s mind with his hotly-anticipated new solo album Universe. Produced by Narada Michael Walden, Universe dropped December 14th, 2020, delivering a 15-song payload of symphonic classical blues, R&B, soul, and rock-fusion sounds applied to both covers and original material. Schon stretches out musically and conceptually on these tracks in ways that Journey records wouldn’t allow and it’s absolutely magnificent to hear his talents flow without limits or constraints. The album’s overall vibe is one of healing and catharsis and Schon uses his soaring, soul-drenched guitar energy to pull deep emotions from his listeners. He’s among the most expressive players of the classic rock era and hasn’t lost a single step along the way. In some ways, Universe could be the strongest batch of guitar work Mr. Schon has ever released.

Schon has been in the spotlight since he joined Santana in 1971 at only 15 years old. He’s a Grammy-nominated guitarist, songwriter, and vocalist with a gift for melody that sets him apart from most rock musicians. With Journey, Schon has sold over 100 million albums, an achievement that has resulted in twenty five gold and platinum albums and nineteen Top 40 singles in the US. He’s a legit Diamond-certified album holder and one of the most identifiable guitar players of the last 50 years. After all this glory, however, Neal still packs the heart of a warrior and goes hard for his art from start to finish on this new set.

The record opens with the moody and evocative “Something In The Heart,” a gorgeous seven-minute instrumental ballad that beers from minor-key despair to major-key triumph. Schon’s phrasing ability is second to none and this long, expansive context makes that point abundantly clear. He’s got guitar chops to burn but has the grace to think like a vocalist, extracting the essence of himself with his tonal and rhythmic choices. He screams, whispers, and bleeds all at once on this one and shows a lot of grit by kicking off a new album with an epic. “The Eye Of God” follows and takes us on a two-minute guitar-and-synth voyage through space defined only by texture and emotion.

Schon reinvents some extremely well-known songs on the record, which is always risky, but they’re actually some of the best moments captured for this project. His interpretation of Jimi’s “Voodoo Child” incorporates orchestral strings along with Schon’s high-wattage guitar work that goes its own way and never imitates the iconic Hendrix original. This, of course, morphs into “Third Stone From Sun” which is, again, given the orchestral treatment. The amounts of energy and free-form musicality generated by these two cuts are overwhelming and will impress even the most hardcore fans of rock guitar.

Schon’s classically-infused retelling of Prince’s “Purple Rain” is another phrasing showcase. Listening to him have his way with a song that has become so important to so many people is a soul-stirring experience. Schon alternates between flying high and burning white hot with an intensity and virtuosity that’ll make all the old 80s kids get misty-eyed. He works the same magic on an instrumental take on Journey’s mega-ballad “Lights” that will hit fans of a certain age right in the feels. Schon’s knack for catching the nuances of great singers and translating them to his guitar is amazing to hear and he’s quite capable of handling center stage all on his own.

He closes out Universe with an energetic jam on The Beatles’ “Hey Jude” that lets the record end with a blast of upbeat rock and roll and a sense of emotional resolution. It feels like Schon’s way of reminding us that we’ve mostly survived 2020 and better days are on the way. Beatle covers are another calculated risk but Neal makes this one shine by approaching it as his genuine, stadium-sized self and giving us all the soul and fury he’s got. Neal Schon is always special but Universe is a definite high-water mark, even for such an accomplished artist. Get this record into your system and let the healing begin.

Listen to “The Universe”