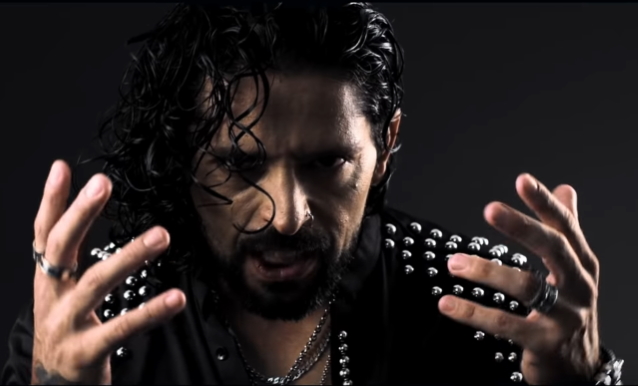 RAINBOW singer Ronnie Romero says that it would be “really hard” for him to be in just one band.

In addition to RAINBOW, the 39-year-old — who is originally from Chile but is now settled in Romania after living in Madrid, Spain for a number of years — is also a member of LORDS OF BLACK, THE FERRYMEN and VANDENBERG. He has also played with CORELEONI and recently laid down his vocals on a new SUNSTORM album.

Romero discussed his many projects during a recent interview with Romania’s Maximum Rock. Speaking about his need to work with more than one band at a time, Ronnie said (see video below): “There is two elements and two factors that, to me, are very important in any project that I get involved. The first one is the artistic and creative side. In my case, and this is my personal opinion, I need to be busy with different things all the time. To me, it would be very boring to be in just one band doing just one kind of music and just one style of music. It would be very boring to play just heavy metal, because I grew up listening to different kind of music, different styles, different singers, different bands. So mostly, what I need is to be involved in different projects, to have the chance to develop my performance in different ways. That’s why I have a heavy metal band like LORDS OF BLACK and I love to be involved with CORELEONI, for example, which is more classic hard rock music, and, obviously, with RAINBOW, because it’s more classic rock, and THE FERRYMEN, which is more progressive, melodic heavy metal. Or now SUNSTORM, which is more AOR music — even more melodic than others. And that keeps me very busy mentally, in my creative side.”

He continued: “The other side is, the other element is the business. Nowadays, there’s no millionaire record labels and millionaire record deals anymore. So, to reach a certain point of life and comfort, you need to be busy with different things.

“I know that some musicians, they say, ‘We want you just in these bands, because if you are in many bands, the people [think it is] boring,’ or whatever. But, to me, it’s really hard to be just in one band, mostly this year, waiting for shows, waiting for albums, just on my couch, and nobody is paying for that. [Laughs] So, exclusivity is not for free. If you want to have somebody committed in an exclusive way, you need to pay for it, and nobody is paying for that. Everybody wants a piece of cake, of you, and everybody wants it for free. And it doesn’t work in that way.”

Late last month, Romero made a social media post in which he decried the hardball nature of the music business, saying that “too many people” in the industry are “beyond the good and the evil.” He wrote in part: “I’m SO fucking tired of this dirty ‘music’ world. Everybody think they have the right to tell what to do or how to do it. Everybody think they have the right to judge you. Nobody is enough educated to be polite or at least talk to you as a ‘person’. Everybody wants a piece of your cake and they want it FOR FREE, because if you tell your price they get offended. Everybody think you should kiss their hand because they ‘give u the chance’. Nobody cares about your feelings, your thoughts, your dreams, your plans… and then when you are not agree with them you are an asshole… everything is so unfair, but you anyway you need to smile all the time, because show must go on. Everybody will blame on you anyway, from their couch or from their golden throne… too many people is beyond the good and the evil…”

Romero made his live debut with RAINBOW in June 2016 after he was selected to front the latest version of the band guitarist Ritchie Blackmore had formed after quitting DEEP PURPLE.