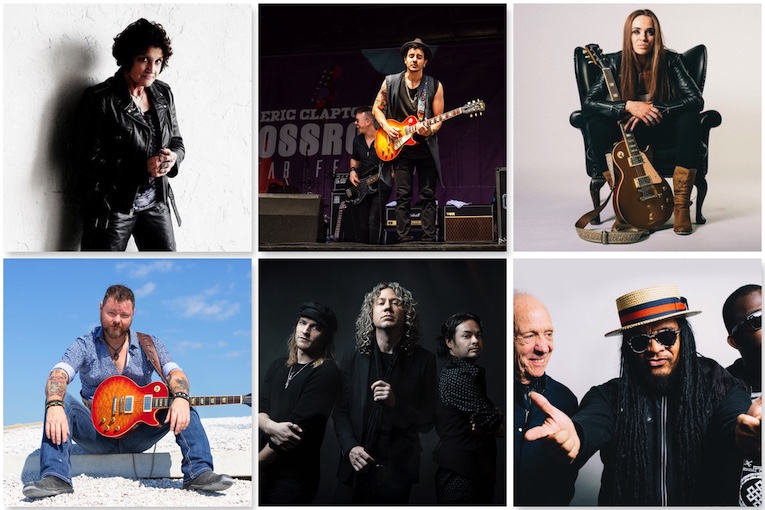 If you’re looking for music to get you through the holidays, music you might not be tuned into already, here’s a selection of some of my favorite new songs. And they’re not holiday oriented, so you can breathe a sigh of relief. These are artists and bands that might be new to you, some maybe not. I tried to pull together a selection of 15 tunes that would spice up your next week and maybe even turn you on to music you can groove to on New Year’s. I wanted to include current musicians that have EPs or albums from the last year. Even if you’ve heard of a few, give the song included for each a listen because sometimes the least promoted tunes are the best.

A few of these artists are a little more rock n’ roll, or they blend rock into their blues, or are straight up contemporary blues. Every single one of them is currently recording, and performing (pandemic withstanding).  A couple fuse a little jazz or more groove into the mix. There are short descriptions of each so you can learn a little about the artists you like.

I purposely stayed away from artists who did not make it on our Top 20 Blues, Rock and Roots Albums of 2020. You can see that article here.

I hope you enjoy.

Gráinne Duffy
You might not have heard of her, but Ireland’s own Gráinne Duffy is an emerging blues star on her new album Voodoo Blues. One of the most notable blues guitarists, vocalists, and songwriters rising to prominence in the European scene, Duffy’s sound is a mix of blues, rock, roots music, and soul blended with Duffy’s own Irish/Celtic style. It’s a swampy, sensual, heartfelt, and spellbinding experience focused on Duffy’s powerful, heart-shredding voice and highly melodic guitar work.
Review
Song “Voodoo Blues”

Eric Johanson
A growing force in the blues and roots/rock scene, Johanson’s music is distinct—it’s moody, sometimes haunting and dark, blessed with groove. Visual storytelling, mind- blowing guitar, and soulful, strong vocals abound on Below Sea Level. Whatever transpired in that studio with this artist’s songs and musical talents, Cody Dickinson on drums, Terrence Grayson on bass (Victor Wainwright) and Luther Dickinson’s production, summoned some kind of magic. For Below Sea Level, Eric teamed up with Luther and Cody Dickinson and recorded the album. A better match could not have been made.
Review
Song “Dose of Forget”

Magnolia Bayou
Mississippi blues swamp rockers Magnolia Bayou’s sound is reminiscent of the golden age of rock n’ roll, flavored with heavy southern swagger that’s distinctly theirs. A soulful, distinctive vocalist and tight band, Magnolia Bayou’s new album, Strange Place is steeped in the group’s origins, tapping into elements of southern, psychedelic, funk, and blues-based rock and roll that the group has reinvented and bent to their will.
Review
Song “Tupelo”

Robin Trower, Maxi Priest, Livingstone Brown
When three legendary artists come together to create a sound all their own, it doesn’t always work out the way it does on United State Of Mind by Robin Trower, Maxi Priest and Livingstone Brown released October 9, 2020 on Manhaton Records. A trio of musicians you might not necessarily put together, they blend their unique sounds to create an album of singular beauty.
Song “United State of Mind”
If you want a bluesy number with stellar guitar by Trower check out the review below.
Review

The Black Moods
The Black Moods play raw, amplified rock and roll with a modern update of a timeless sound. They breathe a blast of fresh air into electric guitars, anthemic hooks and percussive stomp. A power trio made up of frontman/guitarist Josh Kennedy, drummer Chico Diaz and bassist Jordan Hoffman that makes great, crunching rock music with excellent lyrics. Their new album Sunshine is respectful of the past and plugged into the present. The Black Moods built their audience the old fashioned way—by hitting the road, touring heavily and promoting their albums.
Website
Song “Sunshine”

Artur Menezes
Brazilian blues/rock guitarist, vocalist, and songwriter Artur Menezes impresses on every level on his new record Fading Away, a super-hot eight-song set that blends blues with psychedelic rock, funk and Brazilian rhythms. Produced by Josh Smith, the album features guest appearances by Smith as well as Joe Bonamassa. A superb guitar player and strong singer/songwriter, Menezes combines vintage influences with his own contemporary style. Winner of the Gibson/Albert King Award for Best Guitarist, even if this song doesn’t resonate, check out his other musical offerings.
Review
Song “Northeast”

Jeremiah Johnson
Talented blues guitarist, singer and songwriter Jeremiah Johnson released two albums this year, and this one is in response to the pandemic. One of the hottest prospects on the blues scene over the last decade, Mississippi native Johnson knows a thing or two about hard work. By all  accounts, Johnson has come up the hard way, day-jobbing as a billboard laborer while recording and self-releasing some mighty fine blues records. With rocking swagger, Johnson turns up the heat on the record with his power trio.
Review
Song “Unemployed Highly Annoyed”

Sam Morrow
Gettin’ By On Gettin’ Down by Sam Morrow is a blast of fresh air, fuel for your pandemic-weary soul. Produced by award-winning producer and president/label owner Eric Corne, the record is funky country rock with a modern feel. Outstanding vocalist, songwriter and guitarist Sam Morrow has a serious feel for groove that’s inherent in each of the nine songs. With slinky slide guitars and super-tight drumming and bass, this album is a musical feast. Morrow is a compelling artist with a unique sound, backed by top-tier musicians who have a tight grip on rhythm.
Review
Song “Golden Venus”

Cary Morin
Cary Morin’s “Prisoner” opens with some of the finger-style guitar-work for which Morin has become famous. Morin makes his instrument sing, moan and talk, like the great Robert Johnson with a personality all its own. Soulful, rich vocals abound on his new album, Dockside Saints. Behind Morin’s magic, the band kicks up a slow and colorful blues jam.
Review
Song “Prisoner”

Kevin Burt
Guitarist, harp player, songwriter, and vocalist Kevin Burt comes straight out of Iowa with a load of blues power on his new release Stone Crazy. Produced by Mike Zito, the set features ten soul-infused blues songs that showcase all of Burt’s considerable talents, especially his powerfully expressive voice, which easily goes from a smooth-and-sweet seduction mode to a commanding growl in a hot second. Burt’s vibe is influenced by Aaron Neville, Bill Withers, and B.B. King. What a voice.
Review
Song “Ain’t Got No Problem With It”

Hurricane Ruth
The great Willie Dixon once told Ruth “You’re the only hurricane I can appreciate.” Ruth LaMaster has performed with John Lee Hooker, B.B. King, Willie Dixon, Taj Mahal, Ramsey Lewis Trio, Kenny Wayne Shepherd, Royal Southern Brotherhood, and more. Her vocals are deeply rooted in the blues but she also rocks the house. Hurricane Ruth gives it everything she’s got on her new album Good Life, a smoking-hot set that adds up to another huge blast of the deeply soulful two-fisted blues. Backed up by an ultra-powerful band made up of Scott Holt (guitar), Bruce Katz (Hammond B-3, keyboards), Calvin Johnson (bass), and Tony Braunagel (drums), Ruth comes on strong and delivers a performance that would blow the roof off of any roadhouse in the world.
Review
Song “Dirty Blues”

Oz Noy
Contemporary funk/fusion/jazz guitar master Oz Noy presents another batch of his iconoclastic musical style on his new album Snapdragon. Born in Israel, Noy began playing professionally at just 13 years old doing jazz, blues, rock, and pop. Since moving to New York City in 1996, Oz has made a huge impact on the local and international music scene. He’s broken all the rules of instrumental guitar music by focusing on the groove. Oz has toured with just about everyone so no list of names is needed.
Review
Song “Just Groove Me”

Bette Smith
Fierce rock and soul vocalist Bette Smith puts down a big sound on her new record The Good, The Bad & The Bette. Produced by Drive-By Trucker Matt Patton and engineer/drummer Bronson Tew, the album features Smith infusing gospel and soul into rock and roll, with guests including Luther Dickinson and fellow DBT member Patterson Hood. The set is proof positive that an old school mix of soul and rock music never goes out of style and that Smith has every bit of the power displayed by past masters up to and including Aretha Franklin. Smith is a wildly emotive singer with a fearless swagger that permeates everything she does.
Review
Song “Fistful of Dollars”

The Michael Mills Band
The Michael Mills Band stirs up blues/rock fire on their new album, Stand Up. With tasty guitar riffs along with strong, expressive vocals and a tight band, these blues rockers hail from Huntington Beach, CA, and have been lighting up the club scene up and down the California Coast, plus a standing gig at The House of Blues. From blues-funky to straight up blues/rock, this is the band to watch.
Review
Song “I Know”